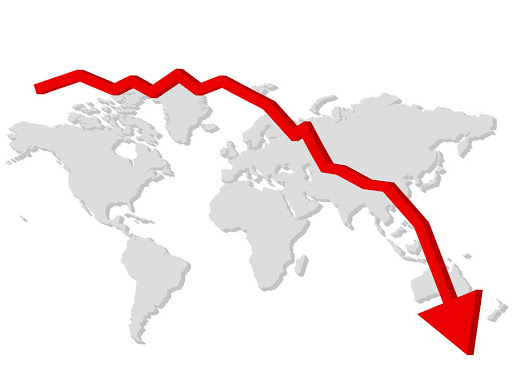 Yesterday Australia’s RBA did exactly as we predicted in yesterday’s news and not o...

Yesterday Australia’s RBA did exactly as we predicted in yesterday’s news and not only cut rates to near zero at 0.25%, but also unleashed QE for the first time in Australia and cheap loans to banks for businesses to help keep their doors open or at least their staff employed.  The Treasurer admitted a recession is certain and danced around whether a depression is also certain.  In fairness, no one knows how quickly we might get out of this.  J P Morgan came out yesterday predicting the US could see an incredible 14% GDP contraction next quarter.  For context, the worst quarter in the GFC saw 8.4% contraction.  However they also thought we’d ‘bounce’ out of it (per the chart below). Being a bank that could well be wishful/suggestive thinking and not one shared by all.  The former chief economist for Alliance Bernstein explains why he begs to differ and also puts the current recession into perspective:

“Economic recession is an infrequent occurrence, but in a fundamental sense recessions are the economy’s way of cleansing the “rot” out the system that have been built up over time. This emanates from bad investments, bad loans, bad policies, excessive risk and speculation.

Recessions expose the vulnerabilities of the economy and the financial system. Even though the proximate cause could come from an outside shock it’s the weaknesses and imbalances that are the underlying cause. So when the “right” shock comes along the fragile structure would collapse. Recessions fundamentally change behavior and policies and post recession business and finance will be materially different.

Since 1960 the US economy has experienced eight recessions; each economic downturn has been different along with the duration and depth. For example, some recessions were triggered by an exogenous shock (e.g. the oil shocks and now the coronavirus could be considered); some caused by tight money (to combat inflationary imbalances) and/or credit crunch. Meanwhile, others were started by an abrupt and sharp collapse in real and financial asset prices (financial imbalances).

In the post war period, the shortest recession has been six months and the longest eighteen. The average peak to trough decline in real GDP was around 1.7%, but the range is wide from 0.5% to 4.0%.

Economic recession acts like a forest fire, such that it doesn’t discriminate between the “deadwood” and the “good” in the economy. In the process, it destroys jobs and people’s lives, but also forces small companies (sometimes mid-sized to big) to close or downsize that were not previously vulnerable. It’s the sheer force of an abrupt drop in spending, the curtailment of lending and the scramble for liquidity where few escape.

Some of the industries largely affected today include airlines, restaurants, hotel accommodations, and recreation (sports centers, parks, concerts, theaters, etc.). According to the data in the GDP report, the annual spending by consumers for these services and activities amounts to about $2 trillion - businesses probably spend similarly.

In other words, if there were a cessation of all of these activities for an 8-week period the impact to the US economy would be over $650 billion, equal to 3% of GDP (this is just from the aforementioned service industries). Only the consumer aspect of the spending decline would directly affect GDP, but these industries would feel the full impact of this spending collapse.

Spending in these service industries is not going to “zero”, but in some cases it will. There are no professional sports of any kind scheduled for the time being or foreseeable future. These companies are enormously affected since they have to reimburse paid customers for travel and events cancellations.

It’s impossible to predict confidently how severe the economic slump will be or the duration. Nothing on this scale has hit the US economy in the post-war period. This disruption goes far beyond work and finance because it also encompasses people’s mobility, health care, education, all forms of entertainment and recreation, and confidence in our government.

Fast monetary and fiscal policy responses are helpful, but they do not fill all of the “holes” being opened in finance and the economy. Abrupt and sharp declines in asset prices have amplified distress, contributing to the downdraft in the economy. It is very hard to see how monetary policy can act as a shock absorber since the Fed’s policy of low rates contributed to the financial imbalances that now exist.

Recoveries from the last three recessions were painfully slow. They were slowed by debt deleveraging cycle; commercial real estate and banking (early 1990s), non-financial companies (early 2000s); and residential real estate (starting in 2009). Odds are high that another debt deleveraging cycle will arise soon since US non-financial companies started 2020 with record levels of debt relative to GDP and cash flow.

It would be a mistake to think business and financial conditions would quickly return to levels prior to coronavirus outbreak. Recession changes consumer and business behavior in ways that are difficult to predict or forecast.

Post-recession, people will rethink travel destinations and the mode of transportation. Social distancing could alter how people choose to experience forms of entertainment and recreation. Businesses might opt for smaller work forces in several locations, versus bunching large groups in one place. They also may restructure existing supply chains or create new ones.

It is obvious government has to invest more in its public health system. Before the crisis is over it may be compelled to offer bailouts to a number of private sector firms at a cost twice of the $700 billion bank bailout in 2008.

Monetary policy will need to fundamentally alter its operating framework. Policymakers cannot avoid all recessions, but it needs to incorporate a better risk management approach in its policy decisions such that it reduces the risks of the “big” ones. Easy money did not cause the downturn, but it did contribute to the severity; it separated finance from the economy, elevated asset prices and encouraged non-financial companies to add record leverage.”

Markets stabilised a little last night but so far we have seen the median US share price down 50% from its recent all time highs or in dollar figures around $25 trillion in just a month.  That’s BEFORE an official recession….

A huge amount of the huge amount of debt in the world is US denominated.  Margin calls and forced deleveraging amidst this recession is seeing an incredible rush to the USD.  Even the Fed printing full speed will not satiate that need but it will flood the world with new USD setting up inflation down the track.  A higher USD is normally a headwind for gold but in Australia we are buffered by an equally (and more) falling AUD.  At the time of writing we are in the 56’s.  That saw gold and silver stronger overnight despite gold falling in USD terms.  Whilst the USD might look like ‘the’ trade at present you need to think about what happens on the other side of this.  Look no further than the GFC when gold and silver had massive rallies after this initial liquidity squeeze whilst shares fell further and then had the slow climb up.  The GFC was very bad but it wasn’t a depression.  This time has all the makings of something far worse as the ‘quick fix’ of throwing more debt at a debt problem seems to be unwinding before our eyes.  Hang on.